How To Get Unstuck?

We all know that we need to set goals. We all know we need a mission statement. We started out so gung-ho at the beginning of the year. But now it’s been a few months and, and….well….we just don’t have the same amount of gumption that we had at the outset of this year. We just…feel…so….lazy.

Or, you may have started out on your goals, and you find that your strategies just are not working. You may have started a business that has not taken off. You may have taken a promotion, but found that it was not a good fit for you. You may have gone out on a few dates, just to find out that the other person does not feel the same about you as you feel about them, or the reverse.

Here’s how to get unstuck. Failure, disappointment, and laziness can have a way of influencing our thought patterns. Over time, if we think negatively enough and become sour enough, our attitudes will attract the very misery we say we do not want into our lives. Acknowledge your disappointment, but don’t wallow in it, or it may be a slippery slope down, and you may never get back up to the top.

In times of failure and disappointment, our character can be tested, and it can be easy to take shortcuts to attempt to reach our goals. Be sure to stay true to your core values, and to practice ethical behavior and decision-making. In the end, if you have remained true to ethical behavior, you will experience the peace and serenity that only doing the right thing can bring.

Example: in the 1940’s, a young inventor took his idea to 20 different corporations over 7 years. All of them turned him down, until he finally got a tiny company in Rochester, New York, the Haloid Company, to buy the right to his electrostatic paper-copying process. Haloid became the Xerox Corporation.

A young man, Mr. Booth, was sitting on his porch enjoying a Midwestern sunset. As he watched the dust swirling in the wind, he thought to himself, “What if man could reverse the wind, so that the wind could suck the dust, instead of blowing it?” Thus was the idea for the vacuüm cleaner born. Ideas are all around us, but we need to have the positive, curious, engaged mindset to be open for the opportunities to present themselves, and to take advantage of those opportunities.

Finally, Forget Those Who Say You Can’t

This hall of “failures” turned to “fame” should encourage you, when you face negative people around you who say you cannot do the things you dream of doing:

Some of this material is adapted from Zig Ziglar’s Success for Dummies. There are a bunch of other great ideas that I found at Zen Habits, which can serve as a quick reference for you when you need a quick pick me up. 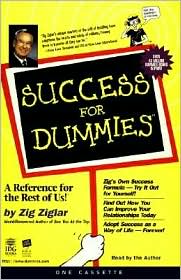